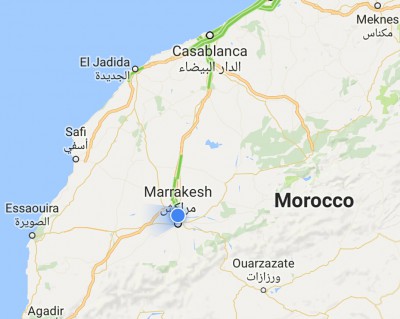 Perhaps the most touristy, and certainly the most vibrant city in Morocco is Marracesh. Known as the red city, it boasts a busy town square and a medina filled with restaurants, cafes and eateries amongst the many many souks. Plotting my plan on the digital map, I found a route that would take me to most of the sights in Marracesh.

As is on par for any Moroccan city, the sights include the medina, the mosque and most probably a mausoleum, presumably in memory of a king Mohamed or other. But Marracesh, being a former capital as well as a long-standing destination for the rich and/or suave, also boasts palaces and parks. 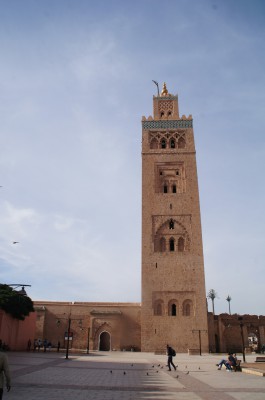 Having been dropped off at the direct vicinity of Koutoubia mosque, that seemed the obvious starting point. Not far away lay the top pick of Marracesh, some would say. The grand town square, named Jemaa el-Fna, home of hawkers, horses and hoodlums, was filled with life, sounds and smells. Berbers, dressed in traditional garb (minus the sneakers and the camera phones, of course), beckoned to have their photos taken. Monkeys in leashes, dressed in baby clothes, was used by their owners to lure in tourists for other photo scams, and defanged cobras was supposedly charmed for the victim’s amusement. Needless to say, I payed them little mind and fewer coins, and made my way through yet another medina.

The goal was the old palace of the viziers, Bahia Palace. Eventually I found the well-hidden entrance, and I could get away for a while from the hustle and bustle of the souks. A short stroll through small park led to a modest, yet intricately designed little palace. Well worth a visit, as well as the symbolic entrance fee. 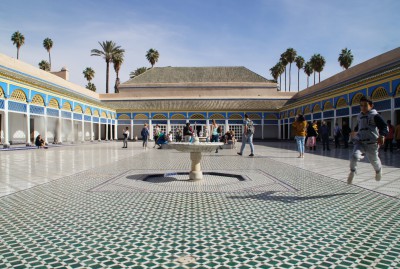 The hunt went on, though the search for the larger, older, and supposedly more grandeuresqe El Badi palace proved preyless, since I couldn’t find it, even with the help of three independent apps.

Having finished my old town endeavours with a rooftop shawarma, I set course for Jardin Majorelle, Yves Saint-Laurent’s memorial botanical garden. A fair walk off, I fretted upon seeing the entrance fee of 70 dirhams (€7),but I had walked far, and eventually saw that they offered a student discount. As I actually am currently at uni, I promptly produced my student ID, and needed only to pay 35.

To be honest, that was about the right amount to pay for entry. Any more would have been overpricy. Though pretty and neat, the garden was small and with very little variety. The royal blue and distinct yellow pots and walls heightened the experience, though, and I do like most cacti. 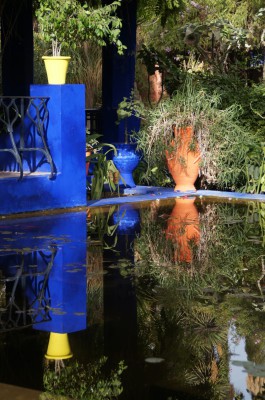 Jemaa el-Fna is slightly different after sunset. The monkey men and snake charmers have taken a back seat to other types of scammers (cups games, coin tosses, fortune telling etc) and the during daytime surprisingly open square has been filled with street food peddlers, all shamelessly nagging you to buy their food specifically, not from any of the other 99 identical stalls. 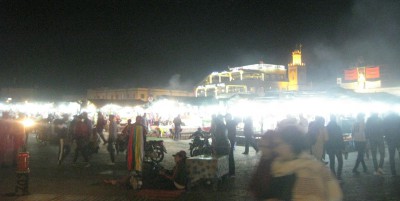 Much as I detest being harassed (I’m perfectly fine making my own decisions, thank you very much!), I still needed to have a genuine street food in Marracesh experience. I chose the least naggy purveyor of shish kebabs and it was good.

Having booked my hotel (cheap, with a bed, four walls, a ceiling, a floor, a toilet and a shower, with no extra frills) in Ville Nouvelle, I got to see the more modern parts of the city as well, and it has all one could ask for as a Westerner wanting to explore the African (in particular the Saharan) culture and mystique, yet with relative ease retreat to slightly more familiar surroundings. Therefore, it’s no wonder that Marracesh, the most touristy, and certainly the most vibrant city in Morocco, is a long-standing destination for the rich and/or suave.