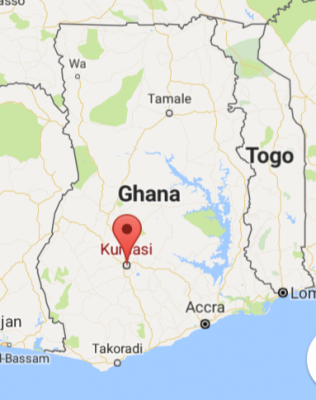 In Central Ghana lies the cradle of the Ashanti (sometimes spelled Asante) kingdom, and nowhere is Ashanti influence more obvious than in the regional capital Kumasi, Ghana’s second largest city. 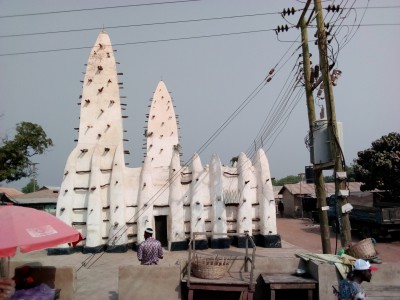 In a rare, or actually unique, instance, we camped in town rather than a 15-60 minute taxi ride away. An almost as rare instance was that dinner wasn’t cooked on open fire on a tight budget, but rather free of choice. Guidebooks and websites all agreed that the best restaurant in Kumasi is The View Bar and grill, so half of us went* there.

Fitting name, the place offered spacious dining with a 270 view of the city and the best steak in 2018. Quite a difference from the fufu (a cassava/plantain flour porridge or dough) I had for lunch. 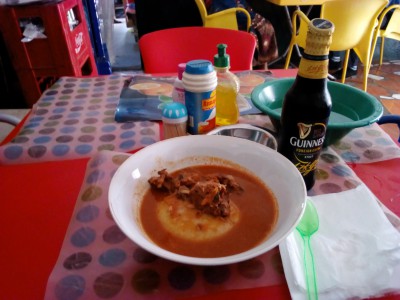 Guidebooks and websites all agreed that the number one thing to do in Kumasi is a visit to Kejetia market, the largest in West Africa. 11.000 stalls and four times as many people working there, the market covers the ground of an entire neighborhood. One could get lost in the maze** for hours, and what you can’t find here in hand-me-downs simply hasn’t been handed-me-down yet.

Obviously I tried to avoid that literal hell as much as possible, but the thing infects its surroundings, swelling into the actual streets, and I found myself all but stuck in a noisy, crowded, suffocating place with no apparent route of escape. Frantically clutching my wallet and my mobile I struggled through, and eventually found myself in relatively open air again, took some deep breaths, getting my bearings, and making it to the National Cultural Centre. There was an opening to a different world. Open space, air, peace and quiet, with streets lined by arts and craft shops, cafés, jazz clubs, museums. There were people there, yes, but they weren’t yelling and they weren’t everywhere. 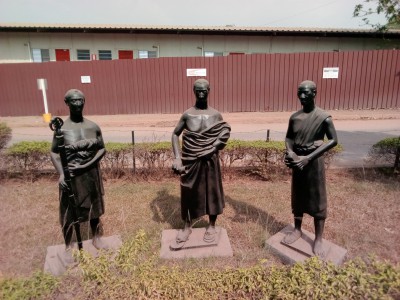 There were the selling of stuff, yes, but they didn’t nag you and harass you and not even once shouted ‘Hey white man!’.

There were vehicles, yes, but they were few and far between, and neither honked, nor spewed exhaust fumes on idle.

A nice oasis in a city that, other than the market, is busy, but not overly hectic.

The museum of Prembeh II Jubilee is situated here, which for a very affordable fee will provide you with a personal guide to show and tell a brief history of the Ashanti kingdom.

Another place where the Ashanti heritage is presented is Komko Anokye Sword site. That is the place where, in the 17th century, the local clans gathered, agreed to join forces with each other and thereby forming the Ashanti kingdom. 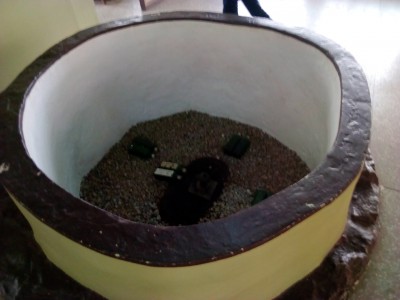 A kingdom needs a king, of course, and since all the chiefs aspired for the throne, the obvious solution, according to the high priest, was to pray to the gods for a sign. And so, after a night of praying, and definitely not making any shady deals, treason and backstabbing, the priest gathered the chiefs anew, whereupon a golden throne appeared in midair, gently dropping down to one of the present chief’s lap, thereby declaring him king***.

The priest then stuck a sword in the ground, and it has never been removed since. Many have tried, yes, but neither bulldozers nor Muhammad Ali could pull it from the earth, and so the Ashanti kingdom remains. True story.

*) With 5 km away from where we were staying, we figured it’d be smoother and quicker taking a taxi rather than walk. Not necessarily so; the adress given is not the same as the actual place, maps.me and Google maps disagree on the location (though not by much) and for being touted as the best restaurant in Kumasi, neither the locals, nor the taxi drivers have any idea of where it is. Thus we stepped out of the taxi somewhere between where the adress indicated and where Google did, and walked the last bit, eventually finding it, just 30 minutes after our reservation.

***) Strange invisible gods hanging in midair, distributing thrones, is no basis for a system of government.
Supreme executive power derives from a mandate from the masses, not from some farcical aerial ceremony.