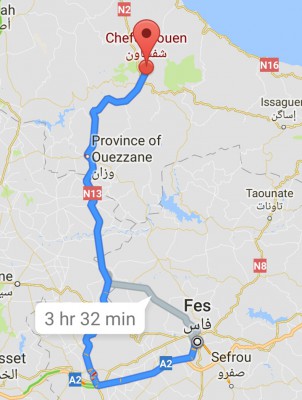 The border crossing from the Spanish enclave of Ceuta on the African side went refreshingly smooth, and we were in Morocco. After a few money changes, Nala steered inland and upwards, taking us to Chefchaoen in the Atlas mountains. Known as the blue city, the houses and cottages lined the steep hills and caught the eye of whomsoever likes the combination of blue and white. The blue was mostly too light for my taste, but the city was wonderfully beautiful nonetheless. 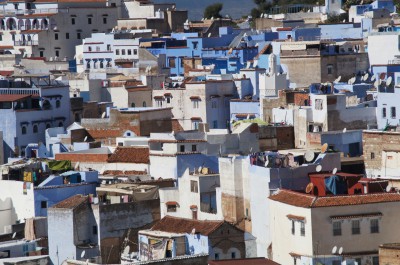 A speciality of the Maghreb in general and Morocco specifically is the method of cooking called tajine, which is basically putting the ingredients in a ceramic bowl, attach a combined lid and chimney and heat it up. The result is a thoroughly cooked meat with all the flavours contained. Along with prunes and almonds the most significant meat of the region, lamb, it tastes yummy.

As if the sizzling plum-and-almond lamb wasn’t enough to remind me that I was in Northern Africa, the call for prayer that started pretty much the same time as my lunch was served certainly confirmed it. Through the megaphone speakers of the minaret came the so called adhan, reminding muslims that it was time to for worship. The practice takes place thrice during the daytime, once after sunset and once before sunrise, totalling five times a day. I can easily attest that the one an hour or so before sunrise is the most annoying of the lot. Moreover, if the muezzin (the man calling for worship) is accompanied by a pack of howling dogs, well that makes the alarm clock even more redundant. And unnecessary. And redundant.

One normally tend to think of Africa as a place where it’s always hot, and even moreso in the desert. Well, Africa is a huge continent, with heaps of different biotopes and climate conditions. Northern Morocco is not all desert, the Atlas mountains reach high altitudes, and mid-november in the northern hemisphere is still late autumn. So the warmth coming from the friendly rays of sunlight during the day quickly escapes back to space during the night, leaving the dark hours chilly, cold even. That would be a bad time to discover that my therma-rest had a tiny puncture, slowly deflating during the night, and leaving me flat on the cold, hard ground in the middle of the night. Finding the hole to fix it would be tricky without a pool of sorts, and buying a new one proved equally tricky. A yoga mat came to the rescue, and will hopefully suffice until we reach warmer lands. 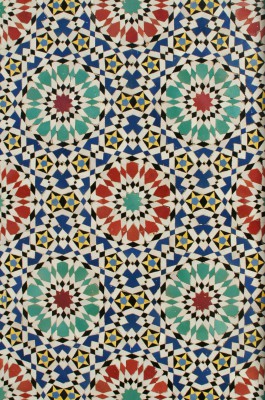 The trading and handicraft hub of Morocco is Fez, and that was our next destination. Exploring the labyrinth* of narrow alleyways of the medina, the souks offered the usual spread of produce, meat, trinkets and pottery. But most specifically, leather. As Fez is the home of the largest tannery in northern Africa, the leather business is all the rage. After watching (and mostly smelling, because the odours from the tanneries ar so strong and foul that the wise person brings a bundle of mint stems to sniff occasionally) the leather getting soaked in concoctions of water, olive oil and pigeon poo and then dyed with poppy, indigo, saffron and the like, we were promptly offered to buy some quality leather goods for rather hefty prices. The gang, consisting of backpacking overlanders with little coin and even less space promptlier declined the offers of €2.500 for a goat leather bag, no matter how awesomely fireproof and soft it was. 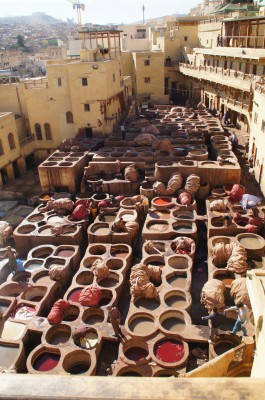 The same went for the other major handicraft forms of the region. Intricate and beautifully made as they were, with meticulous attention to detail and undeniably skilled craft, none of us opted to purchase neither the €46.000 hand tied, 2 million knots carpet, nor the €4.500 mosaic dinner table. That would have been out of everyone’s price range even if the carpet would have been flying and the table would have been magical, setting itself with delicious and healthy food and drink three times a day. But at least shipping was included.

Camel skin and ceramic tajines aside, the one product that springs to mind upon hearing ‘Fez’ is undoubtedly the red, cylindrical, tassled hat made famous by Grunkle Stan, the Shriners, and the Eleventh Doctor. On most of my travels I tend to buy headgear that are useful and/or symbolic of the region, so the 30 durham (around €3) fez I bought felt like a no-brainer.

Freshly outfitted in headwear befitting the locals, me, Tony and Kyle navigated the maze** of the medina in search of the reputed monstrous camel burgers of Café Clock. Perhaps the camel they were made from was monstrous, who knows, but the burgers themselves were rather moderate, size-wise. Tasty, though (best camel burger ever!) and the place was cosy and atmospheric, with a nice view of Fez. 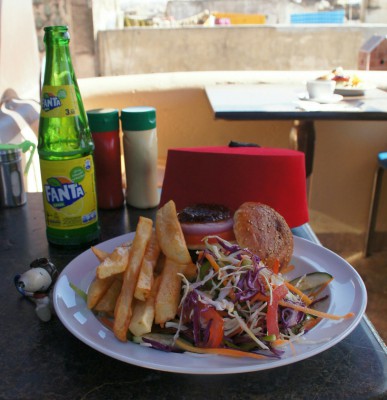 Having not spent €46.000 on a non-flying carpet, having bought a hat for about 1/5 of what I had expected and realising that these ten weeks travel are actually dirt cheap, leaving room in the budget for splurge, I decided to upgrade at the campsite. A bungalow, shared with three co-travellers, shouldn’t dig too deep into the wallet, and while camping is perfectly cromulent, a bit of variation is always welcome, especially when the therma-rest is wonky, the dogs are a-howling, and the cold that I’ve had since London is constantly on the verge of turning mannish.

Yes, the dogs from Chefchaoen seemed to have followed us, or at least their howling.

Perhaps they were Andalusian dogs, having crossed the border from the Spanish enclave of Ceuta.