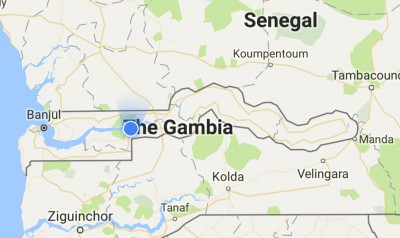 Halfway up the mighty Gambia lies Tendaba. Home of a large variety of birds, as well as the odd simian and lizard, the village bordering on the Kiang West National Park provided ample opportunities for exploring the wilderness.

A bumpy truck ride into the bushy surroundings, and a short hike to the watering holes resulted in a few animal sightings: hawks, vultures and a group of baboons in the distance. There were tracks from porcupines and the local bush pig, but the animals themselves were nowhere to be seen. 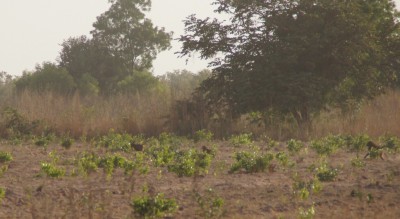 The mighty baobab tree stands still, though, and we picked some fruits and gave it try. Unlike any other fruit I’ve tried, the baobab is almost completely dry. A hard, crisp shell covers a fiberous inside, with some fluffy, porous, slightly crispy material covering the rock hard seeds. The taste and texture is more reminiscent of some foreign candy than fruit, and I couldn’t easily make the connection to the baobab juice I had tried in a café a few days prior. The art is in the making. Unlike basically all other types of fruit and berry juice, where you extract the fluid from the source, with baobab you add water to the fruit, letting it soak, and you shake it all about. That is often enough (but it’s recommended to filter away the seeds and the stringy fibres), but often they add sugar, and/or mix it with other fruits, such as banana, turning it into a smoothie. 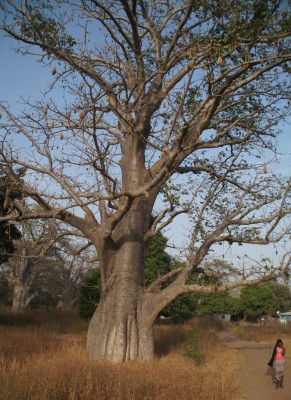 As the area is located by the brackish waters of the river and the mangrove wetlands surrounding it, a small, silent boat with six passengers proved to be a better choice than a 14 person diesel pickup for approaching the local fauna without it fleeing well ahead. 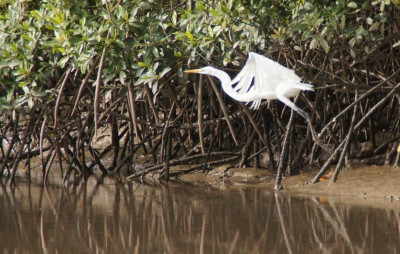 Herons and egrets, kites and kingfishers, pelicans and sandpipers were aplenty, sitting in the trees, sweeping closely over the water’s surface or scurrying over the muddy riverbanks. 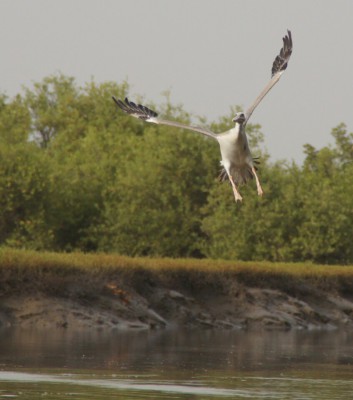 But the excursion offered not only specimen of the avian persuasion. The odd monitor lizard was seen, and crocodiles glided silently into the water as the boat approached, all before I had the camera ready (though I did see them).

The biggest biological bonus, however, was not in the mangrove swamps, but in the river proper. There, in the distance, a small pod of cetaceans was swimming. As we got closer, some put on a show, jumping out of the water, splashing all around. And they weren’t the smaller, darker, river varieties either. These were bottlenose dolphins, and the closest I’ve ever been, without actually being in the water myself. 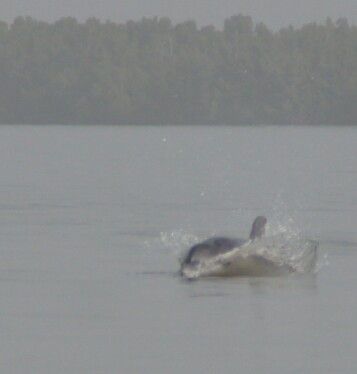 With nature sometimes comes culture. The Tendaba community centre was founded by a Swedish couple some years ago, and run by a few more generations of Swedes before the Gambian government took over. The Swedish flag still flies on the premises. Schools, handicrafts and international exchange with other students are on the agenda. We timed our visit with around 120 British students in their teens, but luckily they left by the very next morning. But not after having contributed to the cultural bonfire by the beach. Lit by the locals, the youth, including the children, gathered to dance, sing and play the drums. Everyone was invited, of course. Our little gang mostly stuck to conversations with the locals rather than joining the singing and dancing, but the teens from the UK shared a bit of their culture, by means of a rendition of Wonderwall.

Waving adieu to the friendly people of Tendaba community, we once more turned to the mouth of the mighty Gambia, and the visas that were hopefully there.

Indeed they were. As were the embassy for Sierra Leone, and with it a promise of a quick issuing. The days spent in the Gambia were therefore nearly over, and the last full day was another B-day. Some of the B:s we lucked out of last time became rectified. Breakfast included bacon, Butcher’s Shop was revisited (this time with bacon) and it was a birthday. In two senses, I suppose, because birthday girl Mary also became an aunt that day. 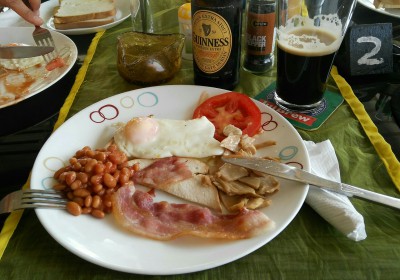 The last B of the day was a booking. With the visas done for the immediate future, the itinerary could reasonably be considered set until Accra, and I could therefore book a flight home. A big plus for the airline that best suited my wishes was the fact that I could reserve a seat directly upon booking, rather than 48 or 72 hours before lift-off, thereby avoiding the dreaded middle seat.

And so, roughly halfway through the trip, I had a better grasp of the future. 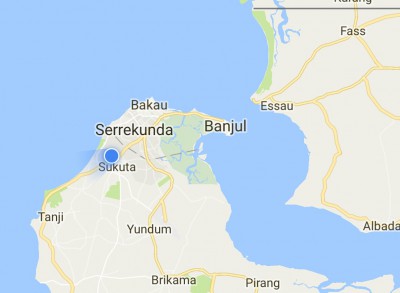 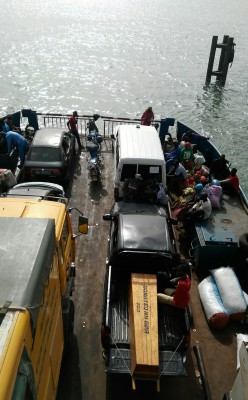 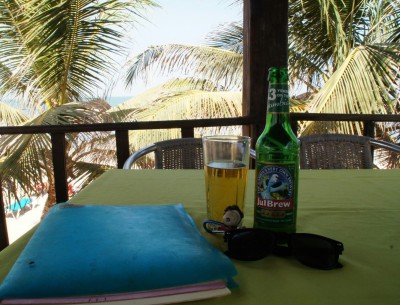 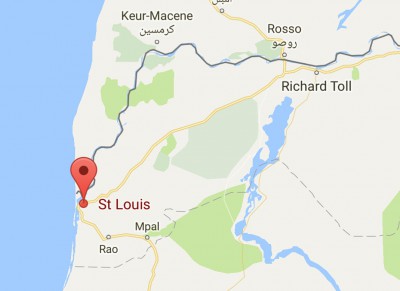 St Louis is a colonial coastal town and former capital on the Senegalese side of the border. It is also the place of Nice Burger, which it not completely is, and its accompanying beer, which most definitely is. 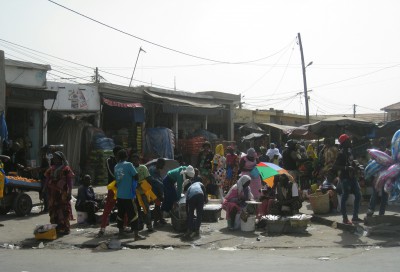 After exploring the chaotic, loud, bustling mainland part of town, a quick walk across Pont Faidherbe took me to another world, it seemed. French colonial architecture lined the quiet and virtually vehicle free streets, references to the air mail era was abundant, and by the water quaint restaurants lined the shore. 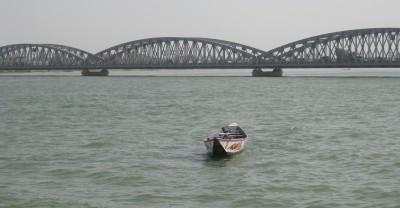 Overlooking the silently bobbing colourful pirouges (the local style of boat) and the bridge itself, we sat down for a few local brews before heading on towards our camp for the next couple of days.

Zebrabar lies in a bird sanctuary, and although the place certainly had more feathery friends than any other place so far on this trip, someone apparently forgot to tell the birds.

A nice and relaxing stay it was, nevertheless, with some kayaking and nice local fish. 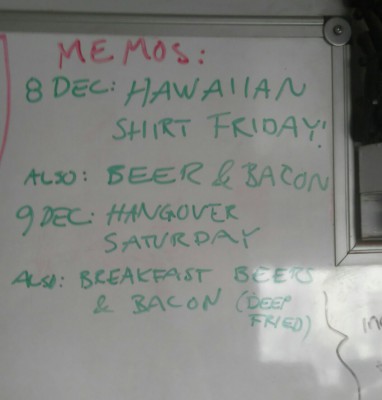 The itinerary had definitely changed by now, and instead of turning east towards Mali, we steered south, bushcamping close to the border of The Gambia. Many were the sticky little thistle-y pods in the reed among which we pitched our tents, and the favourite pastime the next day was to painfully de-burr shoes and clothes. That, and at least for me, reading the Swedish newspapers they seem to export to Senegal, and even moreso where we were now, The Gambia. 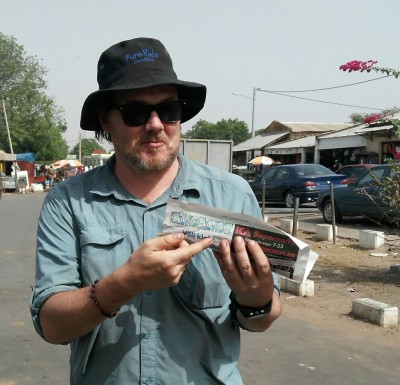