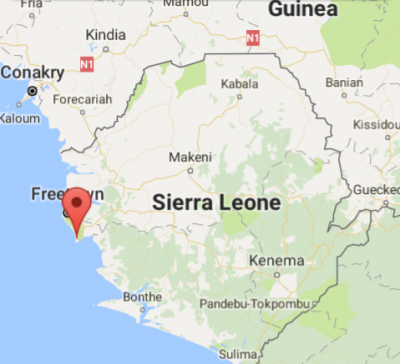 Well, we crossed eventually. Technically, we spent a night bushcamping in nomansland between Guinea and Sierra Leone. But after that, it was surprisingly smooth sailing. With relative ease and speed, we trudged through the Leonian landscape on paved roads, coming to a slowdown in the bustling traffic of Freetown and eventually breaking free and reach one of the many beaches of the peninsula. 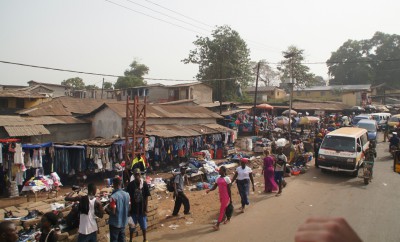 The scarcity of ice for the eskies and the hotness and humidity of the coastal region spurred the thirst of the gang, and luckily the bar by our beach camp was ready. Soon we all had a chilled drink to cool down with.
It is a well-known fact, for those that knows it well, that any beach is guaranteed to infect every fold and nook on your person and belongings within a 15 kilometre radius with sand. And that’s roughly where Tacugama Chimpanzee Sanctuary is in one direction, and Banana Island is in another.
In the sanctuary, they attempt to reintroduce stolen, abandoned and otherwise incapable apes into the wild. They do so in four stages, from being completely looked after in small enclosures, via testing their social compatibility with other groups, to large enclosures where they pretty much get to get by on their own, thereby making it worth reintroducing them. 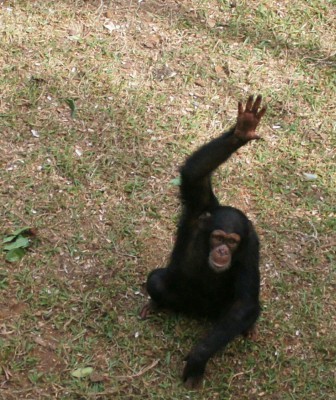 The success rate of reintroduction is rather poor, but one could argue that the chimps are better off in the sanctuary than eaten as bushmeat or trapped in a cage in a zoo. And of course, it raises awareness about the imminent danger our closest relatives are in.

In the other direction lies Kent* beach, from where the local fishermen set oar and the tourists get into wobbly dinghies for transportation to Banana Island, two of which were another passenger of the yellow truck and me. 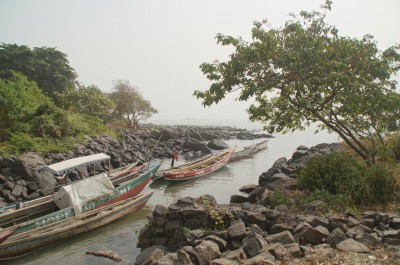 Secluded and definitely more quiet than on the mainland, this is the home of West Africa’s only diving centre (not counting the offshore groups of islands, such as the Canaries or Cabo Verde). A delicious dinner from freshly speared fish with tasty groundnut sauce was served, after which we got our gear together, signed away our lives, and went to bed, getting ready for next morning’s dives. I’ve had better dives, and I’ve had worse. Shallow but interesting, including a shipwreck and some big schools of fish. It was great to be back in the water, though, as it had been almost a year since last time. And it’s a great way to start celebrating New Year’s Eve. 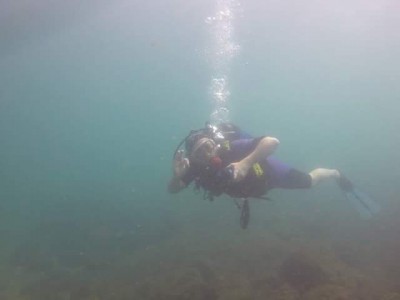 Back at the beach, the fire got lit, and upon the fire grate was laid a big-ass barracuda, wrapped in aluminium foil. Yummy, and the end of 2017 was celebrated.

As our group had representatives from all over the globe, we had a little mini ‘Happy New Year!’ every time some other country passed into 2018. First off was New Zealand, natch, and then followed Australia and Scandinavia before the local big strike of midnight. The party didn’t last all the way to North America, though.

Relaxing at the beach on New Year’s Day, the pizza was nowhere to be found, so we had to settle for lobster.

After the beach and sea getaway, it was time to move on towards Côte d’Ivoire. But alas, between Sierra Leone and Côte d’Ivoire lies Liberia, a country not really advisable for travellers. We therefore headed north rather east, rounding one of the last three countries still not understanding metric, by means of the rocky roads of Guinea.

*) Most of the beaches of the peninsula are named after places in England, or in English history: Kent, York, Sussex, Hastings, Waterloo